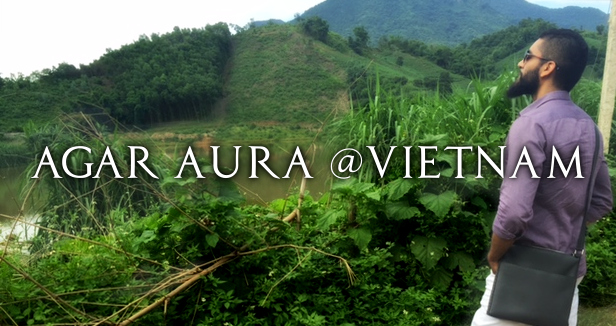 Confession of a flyaholic: I hate flying; the slightest turbulence makes me think a chunk from the wing just flew off. But when your job is tracking down the finest raw materials for making breath-taking oud oils, you gotta put up with it.

Vietnam.
God, this country is beautiful. From the rolling hills and jutting mountains, to the serene rice fields and swaying palms, everything is picture-perfect. And the people too – looking at the geography of this country, I suppose the Viet are of mixed stock and they seem to have combined the best features of Chinese and Indo-Chinese peoples.

I got a lesson about all aspects of life from the cab driver. Grinning in the rear view mirror, he explained to me that the secret to a happy life is a happy wife. Except.. his formula consisted of cheating on one’s wife, and a compulsory visit to Bangkok for it to work.
I got some self-care advice as well. He kept saying what sounded like ‘Benadryl’, but upon repeated requests to clarify it turns out he was saying ‘Bin Laden’ (?!!) and he explained that I need to chop off my beard. I didn’t know how to really react; I laughed because of the ridiculousness of it all.
The kicker: he was a cunning fellow; he had started the meter before I even hopped in. But I was more cunning, having already read online about the reputation of Vietnamese cab drivers. The ask: a whopping $40 for the drive to the hotel. I told him I noticed he hadn’t reset his meter before he ushered me into the car. The grin was gone. He got $23.

It was a rainy night when I arrived. I hurried into the hotel, and when I stepped in, the receptionist startled (and amused) me, exclaiming ‘Spartaaaaaaaaaaa!” Its been almost 10 years. I remember when the movie first came out and I would get that a lot back then. Any how, Canadian sensibilities being more engrained in me than I realized before moving to SE Asia, I thought it was a little inappropriate. But then again, a beard is a rare commodity in this part of the world, he was intrigued, and I was amused, so I just responded with a ‘ha!’

Having spent the better part of the day in a fasted state, I was tired so I just wanted to get to my room… which turned out to be a ‘bed’ room, as in, a bed taking up pretty much the entire room. As always though, I judge a hotel by the softness of the sheets and the comfort level of the pillow. The hotel won in this department with flying colors.
I got changed, got ready for bed, sent a quick email to the wife+mother+mother-in-law trio letting them know I’m alive, collapsed in bed, and before I knew it I was out like a light.

The following day, I got to inspect the agarwood raw materials.
But I’ll leave that for another post….