Agar Aura’s Byakudan No. 1 is our first ever hands-on non-oud distillation.

Although it was meant to be part of the private ‘Syed Series‘ collection of oils which I distill for myself and only share with a very small number of people due to the insane costs and limited availablity of certain batches of raw materials, in the case of Byakudan No. 1 the cost-per-gram turned out to be close enough to being ‘sane’ so I decided to share it with a larger circle of lovers of high grade artisanal oils.

Out of the five remarkable batches of extremely old Mysore sandalwood in my private collection sourced from Chinese and Japanese incense companies, this one boasted the most vibrant scent profie. The others are all extraordinary as well, and I certainly don’t expect this to be my last sandalwood distillation. So stay tuned for more Agar Aura sandalwood oils to come!

Those of you who have smelled this sandalwood at my place, or drank the distillation hydrosol (or both!), know that this is one very very special batch of sandalwood.
At about 500x the cost of typical ‘oil-grade’ sandalwood that was used for making even the finest sandalwood oils you’ve ever smelled, and 100% sinking-grade, I knew it was crazy to juice this wood for its oil. But ‘crazy’ is what we do best!

The most profound thing I got from this distillation project (after the oil itself of course) was the shocking revelation that sandalwood sellers make far more profit than even oud sellers. Distillers of oud oils extracted from ‘oil grade’ wood aka ‘standard grade’ oud oils make a considerable amount of profit, and contrary to what one may think, the profit margins are far lower for incense-grade oud oils due to the intrinsic cost of incense-grade oud wood.

Now multiply the profit margin of those ‘standard grade’ oud distillers by about 200, for sandalwood… I finally realized why the gentleman at whose place I stayed during my Sri Lankan Oudventure lived in a mansion. He was one of the kings of the sandalwood trade during the ‘golden era’ of Sri Lankan sandalwood, and it now makes sense to me how he was able to make millions selling sandalwood.

The raw material for this oil may have been 500x more expensive than what’s typically used distillation, but the cost of the oil itself is only about 25% more than other vintage genuinely high-quality sandalwood oils you can get your hands on.
In other words, you are paying a bit more for a whoppingly massive superiority of the raw material used for crafting Byakudan No.1 – instead of a massively inflated profit margin filling up the price tag.

But an essential oil is only as good as it smells…
So does this sandalwood oil measure up to what you would expect? Yes, and then some.

Opening with an otherworldly ethereal brilliance (a sandalwood version of the top notes you smell in oils like Beccariana and Kachin Ko-Shwe), your first instinct might be to drink this oil, it smells that yummy (and you may: as with all Syed Series oils, this was a hydro distillation conducted in food-grade copper). Sweet-woody and shimmery brilliance, with just a hint of ripe nectarines.
And it only gets better… and better.
The top notes meld into a mouth-watering browned butter aroma, caramelized to perfection. As time passes, the butter aroma turns to ghee. Not just any ghee – we’re talking home-made ghee from Indian Subcontinent buffalo milk.
And unlike virtually all other sandalwood distillations, I concluded the distillation only after all the oil had been extracted from the wood, which gives this oil an unparalleled voluptuous full body and base. Just like oud distillers, sandalwood distillers don’t like to mix in the last 5-10% of the oil extract because typical extraction yields a nasty-smelling oil in the last stages of distillation. Also, the oil flow rate drops dramatically, so most distillers stop short for cost-reduction reasons. Continuing the distillation would mean a higher proportion of the cost comprising of things like electricity, water and gas. The cost outweighs the market price of the oil.

But as with Agar Aura oud oils, I know that sandalwood (like all sesquiterpene-rich woods) oozes out the richest aromatic compounds near the end of the distillation. And so, just as we like to do for our oud oils, I did a full-spectrum extraction for this oil because unlike typical distillation, our techniques make even the last drops smell darn good, and scent-superiority is more important to me than cost reduction.
And hey.. this was sinking-grade sandalwood after all, so there was no way I was going to let any of the precious oil stay trapped inside the wood!

Silage is like no other sandalwood I have ever smelled in my life. Apply the tinest dot, and all day it will smell like there are incense heaters hovering around you heating Mysore sandalwood chips.
Don’t even get me started on longevity. Unlike most people, for me sandalwood typically doesn’t last very long on skin (usually about half an hour, tops). Byakudan No. 1, on the other hand, is detectable on the application spot even the next day.

For your enjoyment, here is a video that captures the birth of Byakudan No.1: 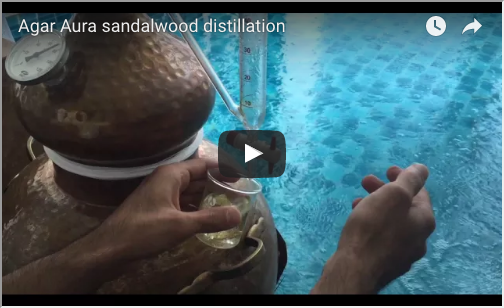