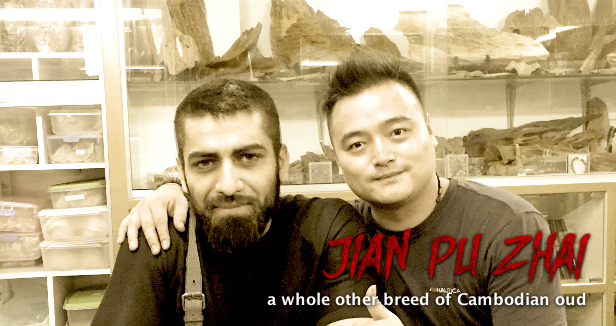 Cambodia and I have history.
Many of you already know that although I reside in Malaysia, all my staff (up until recently) were Khmer thoroughbreds. From hunters to carvers (and let’s not forget Ahmad and Yusof, both Khmer Malaysians), I’ve always felt a certain affinity towards Cambodia, her people, and of course her agarwood. Its the oud country I’ve frequented the most, as my used up old passport and current passport will attest to.

But it goes back even before that.
Having offered rare oud oils from places like Roneam Daun Sam and introducing one of the genres of Cambodian oud in the western hemisphere (a decade ago, no one had smelled this type), it goes without saying that a tinge of sadness pricks my heart as I sit here in Phnom Penh writing this post. A chapter has come to a close.

It may be the end of one chapter in the Agar Aura Cambodian tale, but its also the start of an even more interesting chapter.
In this chapter though, its the Chinese that are the stars of the show, and I’m the dog under the table, happy with the scraps (I promise you though, the scraps are quite scrumptious!)

Far before the Arabian market (the largest consumer of Cambodian agarwood products today) was even aware of the existence of Khmer agarwood, the Chinese had already stocked up on the finest agarwood from here. Just yesterday, I was chatting with the son of a former agarwood hunter, and he shared stories about the sort of stuff daddy dear used to haul out of the jungles back in his day. Before that, the wood was even more legendary. By all accounts, some of the wood described by the old man sure sounded like glutinous black kyara – the sort that can now only be found in the back rooms of Chinese and Japanese collectors under lock and key.

Well, I may have long lost the chance to distill slimy slabs of Khmer kyara, but I’m trying to do the next best thing. Yep, collecting the finest ‘scraps’ I can get a hold of.
Some of these scraps, flying under the radar of the collectors who let let me buy the batches, even contain sinkers. Case in point: a batch I hauled back and distilled which consisted of around 28% sinking grade wood!

If you’ve read through some of my recent blog posts, you’ll know I now distill oils right at home. Cambodia, India, Malaysia, Vietnam, you name it. But the country I’ve focused on the most (surprise, surprise) is.. Cambodia. Right now, I cannot even recollect how many batches I’ve cooked in this past year.  ; P

So here’s where things get a little different, and the paradigm changes-
I am not happy with fresh hauls of agarwood coming from the jungles any more. In the past 2 years the plummet in quality has been so unbelievably drastic, I am amazed by just how deep the ripples generated from the China market demand are, and how far (and how quickly) these ripples have spread.
Today, if an agarwood tree in the jungle is spotted by poachers, it faces instant death. Doesn’t matter if its young and healthy. The poachers hope and pray that the tree will miraculously contain “Chinese Super King” grade agarwood.

As I sat with Peter, a Chinese collector in Phnom Penh, trying to slow down the rate at which he kept replenishing my cup of Oolong tea (he had no mercy for my bladder), I thought to myself how different the oud distillation business is now compared to how it was before – well, at least for those who still want to distill high grade oud oils.

I’ve hunted, cooked, carved, cleaned, wholesaled, retailed, so I assure you I’ve “been there, done that”. Things I never imagined doing a decade ago… I mean, who in his right mind quits his job as the head of Business Intelligence for PwC Canada, to do the work typically done by menial laborers in South East Asia?!

But the new paradigm is somehow even more alien to me.
Politely decline all you wish, a bottomless pot of Oolong replenishes your cup, agarwood cigarettes are flicked at you with a “thumbs up” motion when you walk into the room (strange, how they all do it this way), and an electric heater laces the air with the aroma of awesome vintage batches of Pursat wood (okay, this I don’t mind at all).

I recall when I used to sit at the other end of the table, selling to the Chinese, just a couple years ago when my wholesale wood business was booming. Unlike most Malaysian gaharu peddlers, my hunters would stay in the jungles for MONTHS on end, with strict instructions to only cut down dead or dying trees. If you missed out on our Malaysian offerings, sadly you have a hole in your collection that can never be filled.
Despite my standards, the Chinese buyers with their loupes, mini hammers, long pinky finger nails and outlandish quality evaluation methods gave us hell.

Today, instead of pulling my hair in frustration, I get to smile. These Chinese chaps already did the homework for me. The wood they’re sitting on has already passed their strict quality tests. So its just a matter of me buying batches of wood to cook, if and when I am able to afford them.

Easier said than done though. Aside from the cost factor, there’s also the added annoyance of a very poor yield, one of the pitfalls of using very old wood for distillation. Time after time, I’ve found that some of the most awesomely fragrant batches of wood (especially those displaying hints of ‘Special K’ streaks) have had some of the worst % yields EVER. Case in point: a batch which comprised of around 28% sinking grade agarwood, whose yield was lower than even the Filaria species. You can imagine the blow my wallet took with this batch.

As for the aroma, well, these batches are the finest Cambodian oils I’ve ever made. Or ever smelled in my life. Imagine NOT the ‘liberal’ standards of hunters for whom aesthetic merit has zero value, nor my own former standards. Imagine now the standards of the finickiest nitpickiest Chinese collectors.

I’ve cooked batches of oils that smell like Oolong leaves, tobacco leaves, Cohiba cigars, condensed milk, sanded bitter wood, yellow kyara, and black kyara. Each and every batch is something no one (including myself) has ever smelled before.

Some of these batches I can not bring myself to sell, they are too dear to me. Others, I would love to share with everyone, but worry that the ‘Oudprice Police’ would castrate me when they see the price. What’s a man to do, if the COST price alone is over ~ $500 per gram?! Add even the tiniest profit margin to that, along with the overhead expenses of gas and electricity, and judging by the way some folks have gotten upset by the prices of some of my other oud oils (at a fraction of the price), I don’t know if some of these batches will ever see the light of day. A real pity.
I privately shared a little bit of Khmer Special K v1 (one such batch which I will never release) with a few people, and if you’re one of the few who got to smell it, you already know I haven’t been exaggerating about the stratosphere these oils reach.

Right now, I’m really bummed out because I was supposed to get 100kg of some really old Pursat wood from a collector. It turned out he sold it to someone else.
Meanwhile, I’ve got two other batches of oils cooking. Will they ever see the light of day? I don’t know. The yield will be the deciding factor.

The start of this new chapter has been quite grim, as there is a large rift between the true state of affairs in the supply side (the jungles and present-day raw material costs) and the consumer market (we, including myself, have been spoiled by underpricing).

Underpricing? Taha, are you insane?!
I don’t deny, even the cheapest lowest quality oud IS expensive, if you compare it to pretty much any other essential oil. But what I have witnessed in the past three years has convinced me that almost NO ONE in the supply side actually makes a decent buck in this trade. At least not at the first 2 levels of the supply chain (hunters and brokers). They are violated, trampled on, and cheated. And its only the dream of a large successful transaction “to come” that keeps them going.
If these folks had been paid ethically for their efforts, I promise you, the ‘expensive’ oud oils you’ve been enjoying would have been far, far more expensive.

But that’s a topic for another blog post.
For now, I sit here stroking my chin, and wondering to what end I will continue to make more oud oils. How many will grace my own growing collection of unaffordable oud oils, and how many I will be able to share with others, only time will tell.

My search for ‘Miracle Batches’ of wild agarwood continues. My priority right now is to get raw materials as awesome as possible, for as cheap as possible, with oil yields of mythic proportions (hey, we can all dream right?)
The aim: to distill oils that I can sell at ‘acceptable prices’ as dictated by current market sensibilities and sentiments. With the exception of only 3 batches, its been a bitter failure so far.

Important note:
This is NOT a marketing tactic. I realized after publishing this post that perhaps some might think I’m just cleverly trying to make these top shelf oils sound more enticing by stating I won’t part with them. As many of you already know (having begged me for bottles of some of these oils) I’ve politely declined after sharing only a few bottles and a few samples with some folks. If you’ve smelled the likes of Darul Aman or Khmer Special K etc, you already know how special they are. So you can understand why I also need to have them in my own collection.  ☺