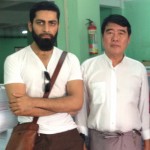 Mr. Wai, the distiller, is an interesting fellow. For one, contrary to what I commonly see here, I am fascinated by his longyi which is tied at his waist elegantly using a device I cannot decipher. He has wise eyes, he pauses before he speaks, and he is very patient. Most importantly, he expressed not a single objection to the Agar Aura distillation techniques I proposed.

He gave me a tour around the facility, and I found everything to be quite impressive. Although I did have suggestions to offer as far as improvements are concerned, I could tell that the place was set up well, and great masterpieces could be created here.

Agar Aura will have several Burmese oils produced shortly, some using traditional Indian stainless-steel apparatus (with our own tweaks thrown in for good measure), and some using Thai copper apparatus.
I was delighted to find that the area at the facility for copper pot distillation looked pretty much like a Thai distillery. In fact, it looks almost exactly like the facility in Thailand where our Sweet Siam and Oud Kampuchea were distilled: copper pots cemented to the ground with high grade Pyrex glass condensers to instantly cool down the oud bio-steam and preserve the pristine aroma molecules. I could tell everything here was set up by Thai professionals, so all I had to do was advise Mr. Wai how to improve on the quality of the oil by doing things the Agar Aura way. This starts from the collection of the raw materials and ends with the filtration and curing methods using. Everything has to be done right. And everything has to be done at the right time.

I sampled 4 oils that had already been distilled. One was awful, which was no surprise since the quality of the raw materials was extremely low. But as for the others, they all displayed something remarkable. One smelled like Chinese Sinesis agarwood. I’m talking raw Chinese agarwood on a moderately hot censer. One had the utterly classic ‘serpentine’ quality that old-school Burmese ouds have, due to prolonged soaking prior to distillation. Totally grounds you, makes your mind purr. Its a sort of ‘leathery’ aroma, but not bovine. Its kinda snake-leather-y…? Its hard to explain, but totally awesome. Makes you think “prehistoric” somehow.

And finally, the last one was so impressive I almost fell off my chair when I sniffed it. It had the peachy top notes of Nagaland (far-east Indian) oud coupled with the orange-blossom aroma of authentic wild-harvested Malinau oud. Add to that the heart notes of classic Burmese oud (minus the barn), and a rich base of Chinese Sinesis agarwood.

The raw materials for producing this oil were harvested in Myitkyina (pronounced Meecheena), and the raw materials was extra high quality. It was no surprise the oil smelled this way. To the right of Myitkyina lies China and to the left is India, so you find scent notes of both Indian and Chinese agarwood in the oil. And the fact that high grade raw material was used gave it the sweet Malinau type top notes.

Both the copper as well as stainless-steel distillations will start in about 2-3 weeks, and I have also already reserved the highest quality oud that has already been distilled.
The first distillations will be conducted using high grade raw material wild-harvested in Myitkyina, and thereafter we will proceed to other regions of Myanmar as well.