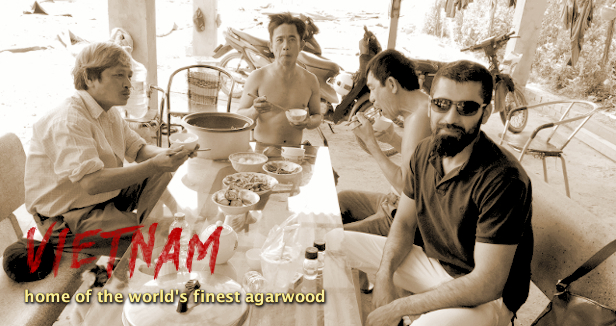 When it comes to agarwood, you just can’t beat Vietnam.
Kyara… ’nuff said!
By now, anyone who knows anything about anything about oud, knows that the jungles across the oud-producing world are in trouble because of agarwood poachers. And at the top of the list of culprits are.. none other than Vietnamese hunters.

So what’s the situation in Vietnam right now? Having spent some time there just recently (cooking some lovely oils), I got to meet some of the heavy hitters, and I got to learn some new things which I myself was oblivious to before.
In this post, I’ll be sharing some of the things I learned, not quite in my usual blog format, but rather as a list of interesting facts and figures.

One of the bigwigs I chatted with is possibly one of the ten biggest players in the Vietnamese agarwood scene today. In the past, he’s sold over 60kg of kyara (I actually think he said 120kg, but I’m not sure). Agarwood is his family business, and he’s seen it all, pre and post China Market craze.
Aside from having hunters on his payroll right in Vietnam, he’s also had a permanent team of 100 hunters in….. Malaysia! Well, now I know who to blame (well, one of many) for the disappearance of old-growth agarwood trees here in Malaysia. Cambodian hunters are some of the best when it comes to tracking down old China-market grade trees. Vietnamese hunters are even better: they’re as good as Cambodian hunters, but are usually more ruthless and determined.
So, this guy USED to have 100 Vietnamese hunters poaching agarwood here in Malaysia. Now that number has gone down to 20.
I USED to have a team of 20 Cambodian hunters. That has gone down to zero (I just have 5 Bugis + 1 Sarawakian hunter now).
I’ll let that sink in, and you can then think about what that means (how that affects me, and how that affects oud consumers).

I visited one of the guys who’s still selling ‘wild Vietnamese agarwood’, and checked out his wares. I could see there were chemically-inoculated plantation chips mixed in. He claimed it was all wild. I took a photo.
The next day I met him again, and asked him what the price of the wild wood in the photo was. Not knowing it was HIS wood, he look at the photo and scoffed at it, saying its NOT wild.
…aaand I got to add yet another name to the list of folks in this trade I can NOT trust.

I find that most of present-day harvested wild Vietnamese agarwood smells fishy. Or a turtle tank to be more precise. The top notes (first 2-3 seconds of the burn) do echo the awesome aroma of yesteryears, but its the turtle tank after that.
So yes, there’s still handfuls of wild stuff that can still be found today, here and there. Its not the same as the good stuff of yesteryears though.
100 fish for every 1 awesome chip.

Virtually all (wild) agarwood harvests in Vietnam today are from trees that were already chopped down by hunters 20-30 years ago, i.e. old dead tree stumps.
I have walked the jungles with the likes of these supermen, and I can tell you: they MEMORIZE everything. They can leave the campsite in the middle of the night (you don’t know the meaning of ‘darkness’, until you spend a night in a jungle), go to the edge of the jungle, excavate the rations from the drop-point… and come back to the campsite. Armed with just a flashlight, and following the cookie-crumb trail they leave behind (usually in the form of twigs broken and bent in a specific way, to mark their pathway), they can walk about 10 kilometres in the same amount of time that it used to take me to walk 2-3 kilometres in the jungle during daytime hours. They know the jungle like the back of their hand.

So they’ll sit down, think REAL hard, and try to remember where they had harvested trees 20-30 years ago. Believe it or not, many times they succeed in finding those old stumps.

Believe it or not, many times they also succeed in finding locations where they found Kyara trees too! Of course, its all root Kyara (not as sublime as heartwood Kyara), but hey.. its KYARA. Day-um!

If two brothers go hunting for such a Kyara root stump, and they find it, their lives are at risk.
The danger: one another.

The biggest importer of Vietnamese agarwood used to be Japan. They stopped a long time ago. After that it was Taiwan. After that, China. They mostly just buy shavings and dust to make incense sticks.

Plantation agarwood in Vietnam, for the most part, is absolutely terrible. Some of the worst I’ve seen anywhere. Way worse than Cambodian, Indian, and Thai plantation agarwood. Using chemicals is the norm, and finding organic wood (like what my colleague Adam used for distilling his awesome oil, “Bio Kyara”) is like finding a needle in a haystack.
Interestingly, this wood smells like a turtle tank too, and the oil extracted from such wood – even more so.

There is no hope left for Vietnamese agarwood. Sure, I did recently manage to score some excellent wild wood to make three batches of oils, but this is not something one can count on. There simply isn’t enough of the good stuff around, to build a market, an ongoing industry out of.

Its no surprise then, that cheating in agarwood is among the most skillfully practiced in Vietnam. Vietnam has the name, due to her agarwood of yesteryears. The swindlers of today piggyback that name.

Vietnamese agarwood traders, just like the Chinese, started storming Arab countries in the past 3-5 years. They go to old oud shops and buy back wood, often times even coated in wax (which they then bring back to Vietnam and shave the wax off of). Apparently, they have even succeeded in snatching up some batches of Kyara this way. The poor ol’ shopkeepers, unaware of the true value of Kyara, think they had an early Eid.
But the Nams are even happier. They flip that wood for up to 8,000x the price, in the Chinese market.

For some strange reason, Vietnamese oud oils DO NOT OXIDIZE! Or at least at no perceivable rate.
I have no clue why, but they fare much much better in even tiny quantities sitting in a sample vial (90% air, i.e. a ton of oxygen) after years, than oils from elsewhere after just a few months of sitting in an air-filled vial.

I thought I was the first among artisanal vendors to craft a high grade Vietnamese oud (Betonamu Jinkoh, a Nha Trang brew). Turns out my colleague Ensar had already beat me to it. Adam made one just recently as well.
These batches are extremely rare, small-scale, very expensive… and super awesome.
If you get the chance to own some, do not hesitate to pounce on the opportunity.
These uber-rare, super awesome batches are “once-in-a-lifetime”opportunities to own a piece of history.